Being a web based Car rental software, Carhire Manager Web was initially designed with a traditional web UI. At some point we decided to enhance the look and feel of the software , simply speaking,  to add more beauty.

The aesthetic appearance, Ease of use and speed were our main important criteria while trying to revamp the UI Carhire Manager Web. We found out that by making effective use of the jQuery technology we could provide an appearance which every windows user finds quite familiar. Actually we decided to give a "desktop" look to our Web application and we did it.The user can pin and unpin icons on the screen, organize the icons on the desktop , use windows like start button e.t.c. Yes it looks like desktop but its Web 100 %.

Apart from the appearance, speed is without any doubt a very important part of a UI. The new UI was not only beautiful but also also faster than the previous UI. As we were not fully satisfied with the performance change we tried to enhance performance even more. After all,  better performance means higher productivity. After a number of technical enhancements and tweaks in the software, we managed to reduce loading times and increased the overall performance essentially. Thus the outcome of our effort: Beauty and Speed is what the users  of our car rental system enjoy today. 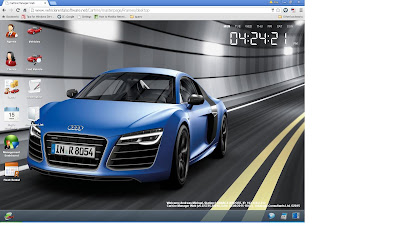